The reason for this post is because we often hear people confusing Mechanical Smoke Exhaust/Smoke Extract systems with Depressurisation systems. This article is to explain why the two systems are different and shouldn’t be confused.

To set the scene for this article, there are four different types of smoke ventilation system. I’ll briefly explain each type.

This is where we create apertures in a building and allow the natural properties of smoke to carry it out of the building. These are usually used in low rise buildings with short corridors.

Where we use fan sets to extract smoke from common areas. These are used in buildings with longer corridors.

Where we increase the pressure of protected zones to prevent the smoke leaving the fire zone. Currently, these are not overly common and are mainly used in firefighting shafts in commercial buildings.

Where we decrease the pressure of the fire zone to prevent the smoke leaving the fire zone. These systems are quite rare and are usually used to protect basement stair cores.

Now, to the main topic of the blog. We’ll start by briefly explaining a smoke extract system.

A smoke extract system often referred to as an MSVS (Mechanical Smoke Ventilation System) works by extracting smoke from the protected corridor or lobby and out of the building via a damper into a smoke shaft. Inlet air to replace the air being extracted is provided via either the staircase, a natural smoke shaft or a mechanically assisted inlet shaft. 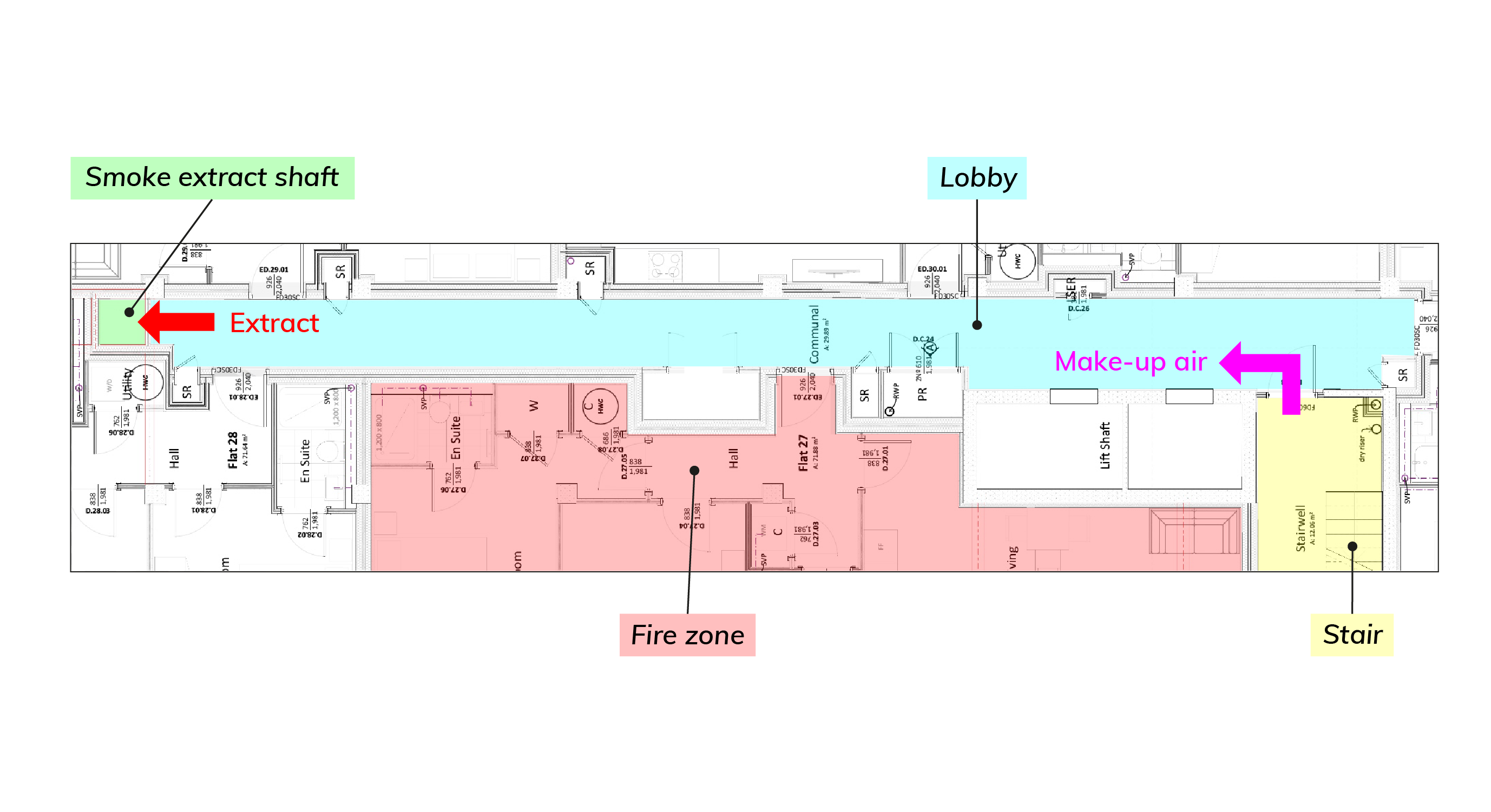 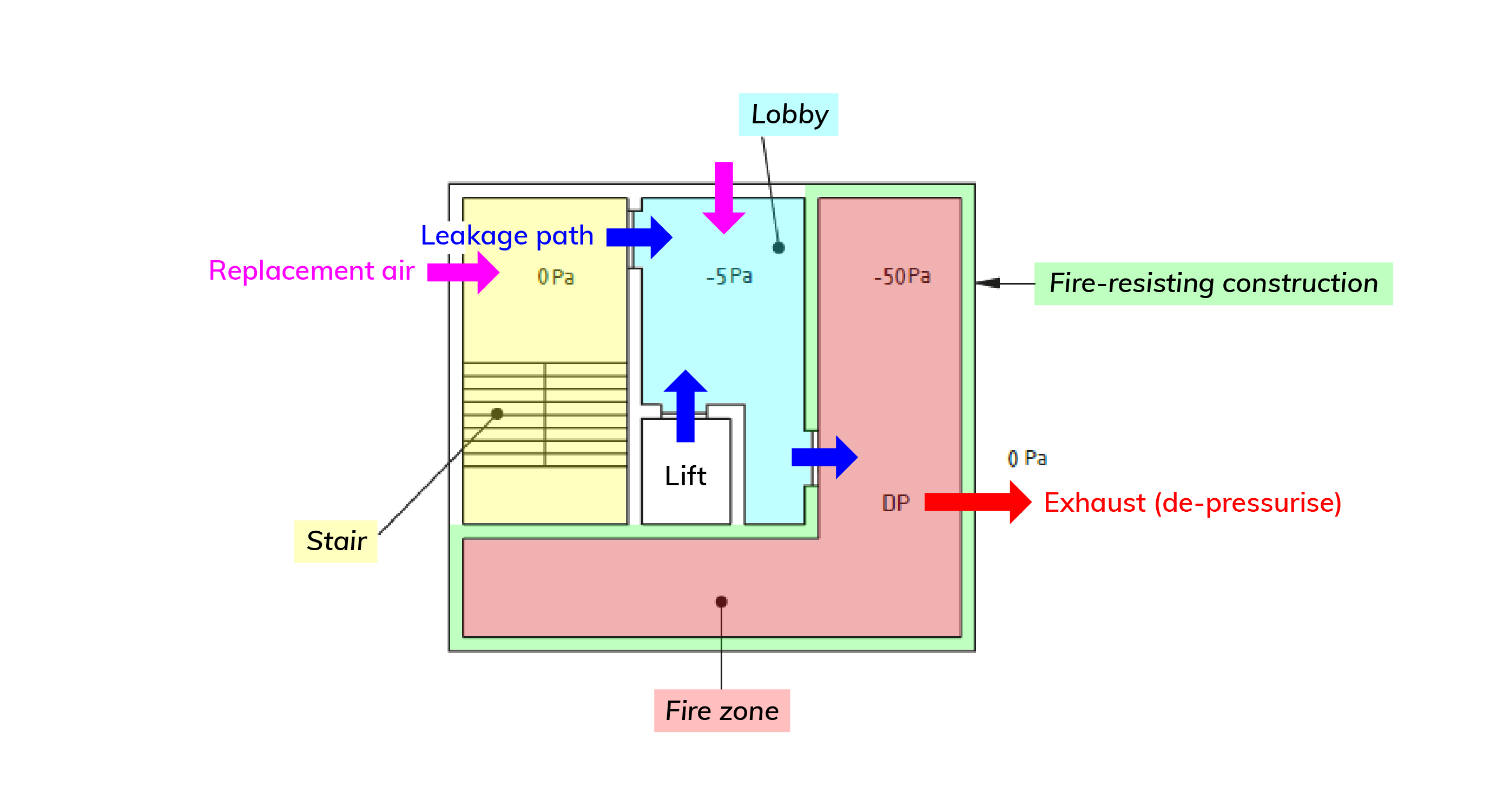 It’s easy to confuse the systems as both systems extract products of combustion and some level of depressurisation occurs in both scenarios. The main difference lies in the location of smoke extract and the system performance criteria.

With a depressurisation system, the key performance criteria are to maintain the airflow through the door in an open door scenario and a pressure differential between the fire zone and the protected zone in a closed-door scenario.

With a mechanical smoke extract system, whilst the criteria do vary depending on the length of the corridor, the performance criteria during means of escape is to prevent smoke from entering the stair core (by removing it from the corridor) and to return the corridor to tenability within two minutes of the apartment door closing. We cover tenability in video on our YouTube channel. Tenability criteria should be considered on a per-project basis but a good rule of thumb outlined in the SCA Guide is visibility of 10 metres and a temperature of no more than 60C at 1.8m.

This difference between the system types is highlighted in BS EN 12101-6 section 9.1, where it states:

It is important to note that there is no protection of any part of an escape route within the depressurized space itself, which may be entirely filled with smoke, or may even be fully involved in a fire. This constitutes a fundamental difference between depressurization and smoke exhaust ventilation.

Now we’ve outlined the fundamental differences between a depressurisation system and a mechanical smoke extract system, we’ll look at where each type of system might be used.

A mechanical smoke extract system is commonly used in residential corridors to protect the stair and maintain tenable conditions in the corridor during means of escape. During firefighting, the system will continue to maintain the stair core and a certain level of tenability but with less onerous tenability criteria due to firefighter PPE, breathing apparatus and training.

Depressurisation systems are quite rare beasts but where they are used, their primary role is protecting basement stair cores. Whilst they aren’t restricted to basements, there is a fundamental requirement of a depressurisation system that means they can’t easily be used in other places. This is that they must, to quote BS EN 12101-6 section 9.1,

...be bounded on all sides by fire-resisting constructions, because any loss of integrity would result in equalization of pressure between the depressurization zone and external air. Amongst other things, this means the room cannot have any window that may be subject to breakage.

We should all make a concerted effort not to conflate the two systems as one of the challenges for those investigating the Grenfell tragedy is that it’s not clear what type of system was being designed - the system design took characteristics of both pressure differential systems and mechanical smoke extract systems and this has meant it’s been difficult to assess whether or not the system design met the requirements of Building Regulations due to the mixture of performance criteria.

I hope this clarifies the difference between depressurisation and mechanical smoke extract systems, if you have questions or comments, I’d be glad to hear from you!

Get in touch.
Want to learn more about our products? 😊
Talk to us
Systems
Natural
Mechanical
Car Park
Products
Roof
Roof Access
Facade
Shaft
Resources
Training
Blog
Videos
Get in touch
Chat
Get in touch
Start a project