What is the stack effect?

The stack effect, sometimes known as the chimney effect, is the movement of air into and out of buildings through unsealed openings, chimneys, flue-gas stacks, or other containers, resulting from air buoyancy. Buoyancy occurs due to a difference in indoor-to-outdoor air density, resulting from temperature and moisture differences. The result is either a positive or negative buoyancy force. The greater the thermal difference and the height of the structure, the greater the buoyancy force, and this creates the stack effect. The stack effect helps drive natural ventilation, air infiltration, and fires.

The main thing which causes the stack effect is extreme temperatures, meaning the seasons of the year affect how air moves in a building. For example, if it was winter and there was very cold air outside a building, it would be expected that air inside the stair core of said building would be warmer, and would therefore be rising up the stair core. This would result in there being greater pressure at the the top of the stair and lower pressure at the bottom of the stair. This would cause an inflow of air at the bottom and an outflow of air at the top.

It’s very important to be aware of this due to seasonal effects causing pressure changes within stair cores, and the key to a pressurisation system functioning effectively is achieving a pressure differential between a fire zone and a protected zone. This means the seasonal changes have to be tracked in order to adjust the amount of pressure being sent to different parts of the stair core at different times. More pressure would either be pumped into the top of a stair core or into the bottom of it, depending on the weather and the pressure changes said weather is causing.

While the stack effect applies to most buildings, it is much more extreme in the case of tall buildings. Here’s an example of how extreme this can be using the scenario of keeping ground floor premises warm, as this is where the stack effect is usually the most noticeable.

In a 70+ story high-rise building, to maximise their location, the business has entrances at the street and from the building lobby. The business expects high levels of traffic through both entrances, especially in the morning and during the lunch hour. Calculations suggest the building could be under extreme negative pressure when the outdoor temperatures drop below -6 to -1 degrees Celsius.

If both sets of doors to the ground level location were opened during the morning rush hour, the negative pressure in the building lobby would pull 1302 Cubic Metres per Minute of air out of the store and into the lobby, while also pulling the same amount of outdoor air into the store. If the space volume was around 1300 cubic metres, all of the warm air in the space would be replaced with -6 degree air within 60 seconds if the space remained in its current condition. This is why many tall buildings have revolving doors - to reduce the likelihood of two doors to the outside being open simultaneously. 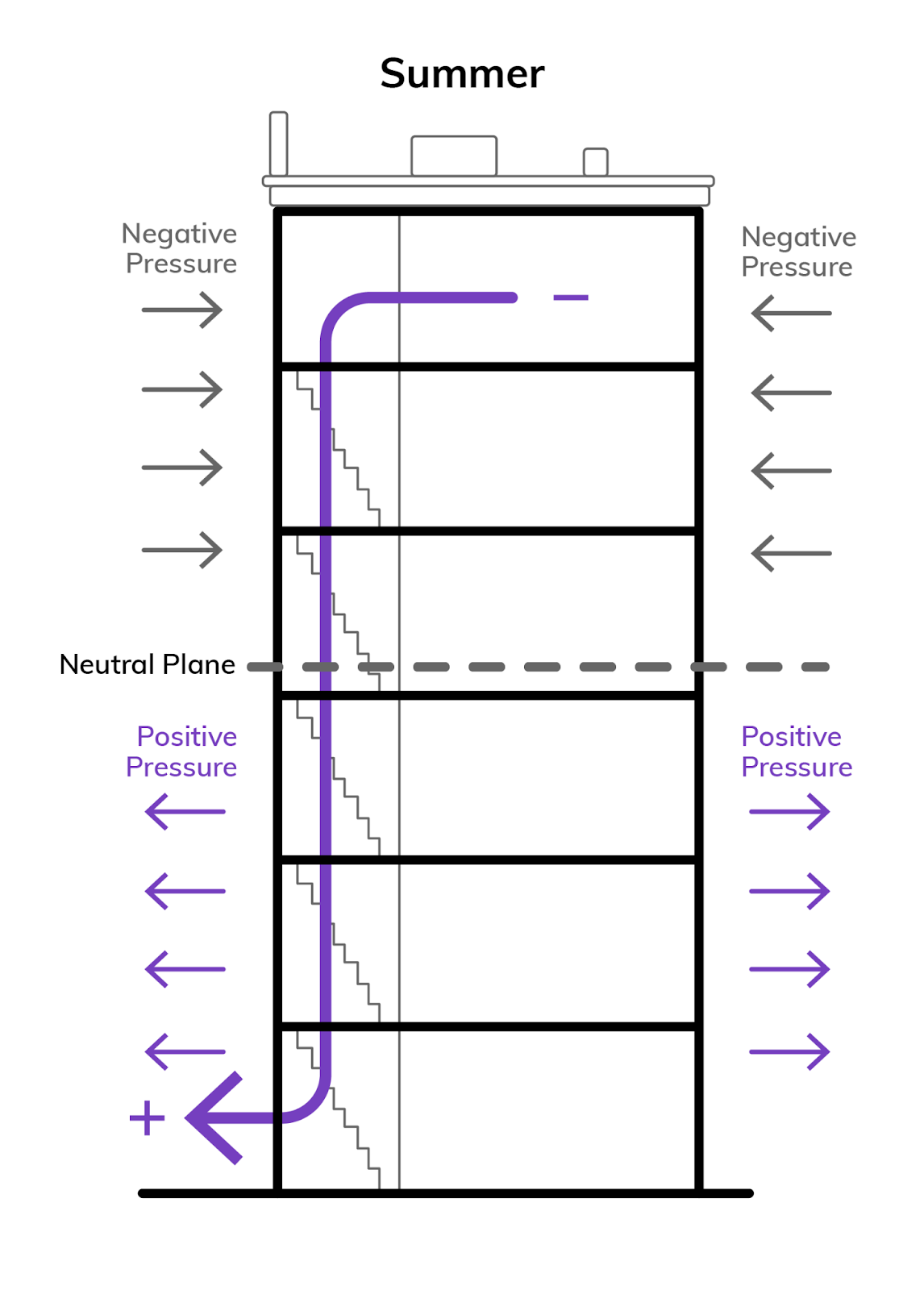 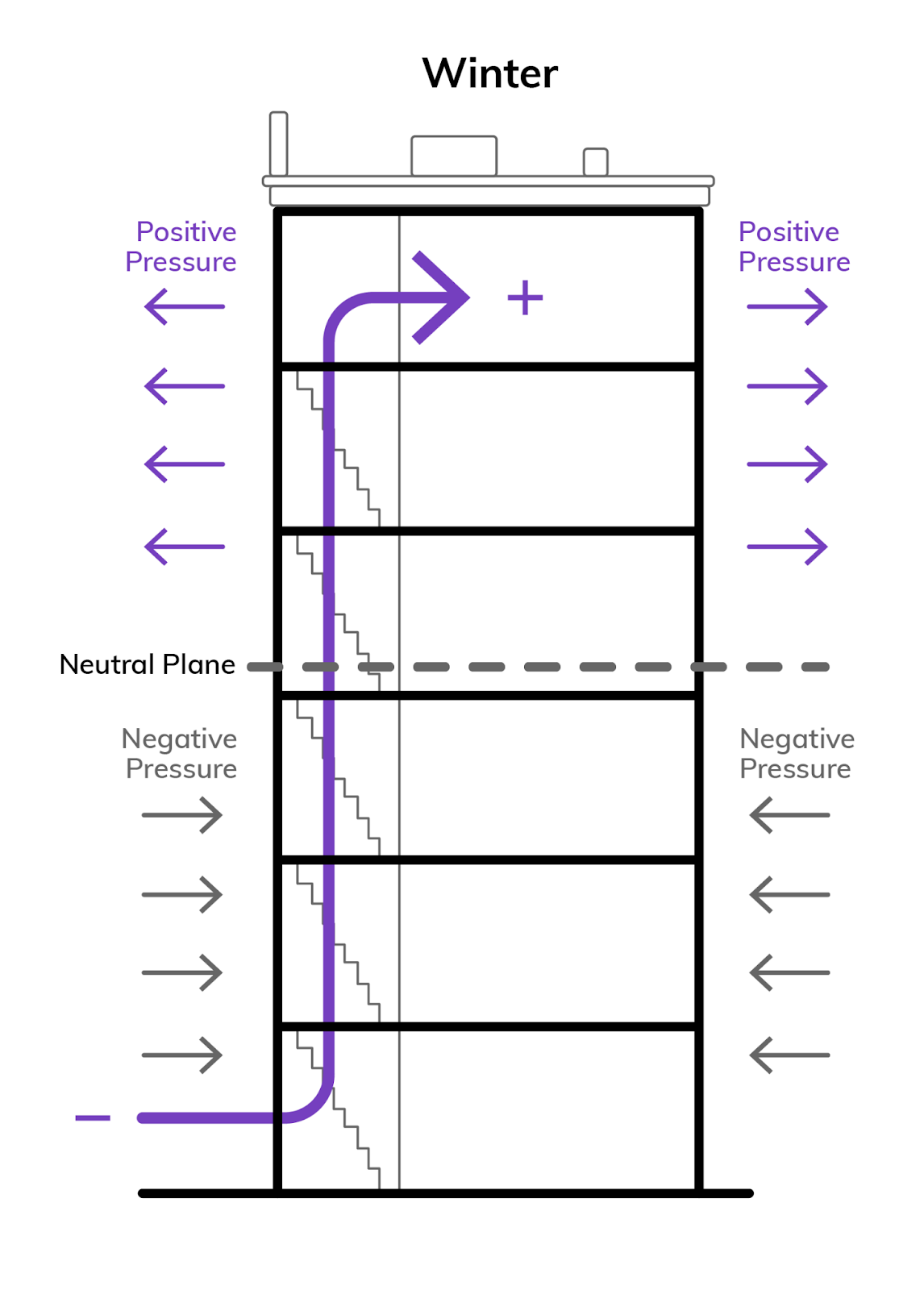 If you have any questions regarding this topic, please don’t hesitate to contact us and speak to our friendly team who will be happy to talk you through the options available. If you’d like to continue learning about smoke ventilation, you’ll find some helpful resources on our blog and YouTube channel.

What is the Stack Effect?

Watch the Video
Get in touch.
Want to learn more about our products? 😊
Talk to us
Systems
Natural
Mechanical
Car Park
Products
Roof
Facade
Control
Basement
Shaft
Roof Access
Resources
Training
Blog
Videos
Get in touch
Chat
Get in touch
Start a project